My has it been a busy year!  Already halfway through 2013 and I haven't had time to blog at all!  *Gasp* For someone who specializes in Social Media, it is rather ironic to see my own scores in Kred and Klout, but honestly, those metrics aren't including all I do for everyone else including myself.  In which case, I'm sure that my contributions would put my metrics through the roof!  But I digress...

Here's a breakdown of what I've been busy doing for the first half of 2013...

Bo's producing 4 films and is in pre-production on a 5th film.  I've been assisting with content curation for the films "Paying the Price for Peace" and "Accidental Activists" on social media sites such as Facebook, Twitter, and Google Plus.  I also looked into consolidating his other released films under one hosting umbrella, and creating a Google Analytics account for Bo to keep track of all of his websites including Oil on Ice, Islands of Life, Paying the Price for Peace, and Bo Boudart Productions.  My most active work is primarily with Paying The Price For Peace and Accidental Activists, and I plan to implement more including adding blogs to the Paying The Price For Peace website, producing a website for Accidental Activists, producing a benefit concert, and a second Indiegogo Campaign to help fund post-production and distribution.

Since I've got so much going on with all my other clients, I have recommended that Outpost do a website rebranding so that the site can be managed in-house using a Wordpress CMS.  I have been assisting with building out a new template and migrating the content from the old site to the new one. I have been making recommendations for site work improvements, and have been improving the overal functionality of the new site which will be finished and ready by the fall.  In the meantime, I am periodically updating the main news page with recent projects.

Karen Everett changed the title of her work-in-progress documentary from Bold Mother Hubbard to American Visionary.  This timely film is about Barbara Marx Hubbard and her vision of our future.  The most recent crowd sourced fundraiser on Indiegogo was successful, so she's raised a total of over $47K altogether.   The project is well underway and I'm very excited to see Karen's film when it's "in the can"!  I of course believe in her project and her goal to produce and promote socially conscious media, so I am a positive patron.  In addition to supporting her documentary, I also assisted with site migration to Karen's new domain name and did a quick site re-branding, including updating the slideshow, changing color aesthetic to match her new logo, and re-configure the social media widgets.  Here is the newest trailer for the film...


I assist with the backend of the Wordpress Content Management System (CMS) for the overall style and functionality of the CMS portion of the site along with standalone page promotions. They send me a Photoshop comp file, and I convert it into a live page for use in their system using Netbeans. I code the HTML page and then style the pages in CSS. I have my own sandbox on my server to test the pages I build, then I upload them to the Github repository for inclusion in their QA site. &nbsp;Once the project is given a "go," I make the necessary additions to the live CMS production Wordpress site and the pages go live. So far this year, I've produced 6 of those and I tend to deliver them within a week of receiving the comps.


I began working with Gauger and Associates in May and began primarily with Calorease, and have incorporated two additional accounts along with that. Along with building out networks on Facebook, Twitter, G+, and Pinterest, I have also made additional recommendations for SEO, and website improvements.

Here is the breakdown of what I have accomplished specifically with each... 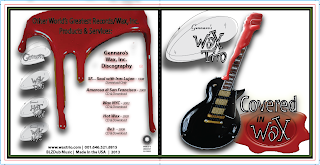 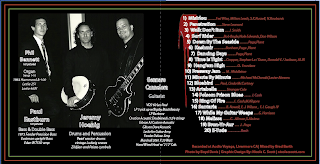 I designed the packaging for Gennaro's 6th release, "Covered in Wax".  Gennaro is an excellent guitarist and did an excellent job of covering some of my favorite songs.  I even like some of his versions better than the originals!  He had the concept already of what he wanted (white cover, guitar covered in maker's mark wax, etc. He provided miniature guitars that are similar to his own make/models and asked that I add dripping wax, and have the color theme be white, black and red.  Based upon his requests, I produced comps for him to review and made changes as per his request until he was ready for print.  I supplied the final assets to the printing company and the package came out great!  Along the way, I also set up his Facebook page and Twitter account, as well as assisted with producing show flyers for his gigs.

I have been involved with the MCLI for a few years now.  Ann Fagan Ginger was an instructor at SFSU when I was studying for my film degree and her no nonsense approach to Constitutional and International Law was more than inspiring.  I believe in what MCLI is doing, so I want to help them with their online presence.  I've been assisting with their Wordpress website, implementing a more modernized newsletter approach to include email campaigns, help with their Facebook and Twitter accounts, as well as plan to produce a crowd-sourced fundraising campaign to bring the non-profit some much needed income to continue doing the important work they are known for including shadow reports and educating others on the laws the United States is under an obligation to honor.

I began to assist with building Seth Chazin's online presence for his Law Offices.  I took up the Lawlytics CMS interface of his website and have implemented SEO strategies to improve his website ranking, as well as have built out additional profiles for him on Google Plus, and have begun to build out his networks in Facebook, Linkedin, and Twitter.  I have produced his blogs since January and have included more images and visuals as well as links to make the content more attractive.  Along the way, I have also enlisted both Seth and his assistant to incorporate social media duties into their repertoires and am training them both on the strategies that will increase visibility for their law practice. The strategies implemented have increased his visibility within the legal community, as well as have improved his overall authorship ranking. 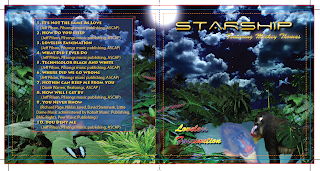 Loveless Fascination is the latest CD to be released by Mickey Thomas.  I have worked with him on the design based upon his vision of a Mandrill looking at his reflection in a jungle at night.  The concept art was in development and I worked with Mickey to bring about his vision.

Unfortunately, the record label has decided to only do in-house work for their CD's, so my version won't be printed.  Regardless, I can share with you what the concept art looked like to get an idea of what I had created while working on all the other projects listed in this blog.  The CD was a work-in-progress, which has since been shelved.  It was fun to work with Mickey on the concept, however, so I should still be including this work here as it was something I was spending time on during the first half of 2013.

Univfy had just begun to get started with social media, when their videographer Paige Bierma recommended they consult  with me to get their social media up to speed and train one of their in-house employees on how to use each platform to their advantage.  They had only really done work on Twitter. I assessed where they were at and what was needed.  I began making recommendations on strategies to implement.  When starting, their Facebook page had less than 100 fans.  Today, they have over 8,000 fans!   I went about setting up all of the back-end aspects to their online presence, like incorporating their Twitter account into their Facebook Page, as well as creating a Univfy Pinterest account, upgrading that account to a business account, as well as creating a Google Plus account and Univfy Google + business page. I improved their Youtube channel (which is unfortunately no longer available to see now that Youtube 1 has gotten rid of the previous channel appearance that I liked better).  I also added new tabs to their Facebook page and integrated their accounts with other accounts.  I helped work with the Univfy team remotely using a Facebook admin group to make recommendations to the team regarding insights, posting strategies, and more. They've since taken up the media content projects themselves and so I can focus upon many of my other pursuits!

Along with these clients and accounts, I also feel passionately to inspire, to contribute to social change, to be of service to humanity.  So, I contribute to my own social media pages such as LVX1313, Incredible Living Edibles, Solveation, Pantheist Spirituality, Shadow Worker (here's the old Myspace account before Myspace destroyed my design. Thanks Myspace, for destroying my multiple pages there that I spent years building.  NOT!), There's one more page I manage on Facebook which will remain anonymous, as it is a tithing for humanity, so to speak.  Needless to say, that particular page has the highest number of followers for all my personal pages which I have grown entirely organically with zero ad campaigns. There are now over 1200 followers and counting there with people from all over the world, so I find that particularly amazing, since I haven't devoted much time to it - posting infrequently.  Considering all that I accomplish in a short amount of time, I wonder how formidable I would be if I were to focus all of my energies into just one place and/or thing!.

Currently this summer, while my children are enjoying summer vacation, I have been teaching my children how to use Garage Band, so that they can begin producing their own music, which is a good idea, given they have grown up at Soundwave Studios with a bunch of musicians. I'd love to produce music of my own, but until I find an affluent benefactor that believes in my talent and allows me to focus full time on being a producer of art, music, and videos, I will spend countless hours working for others to pay for my living expenses.  At any rate, although I enjoy playing drums/percussion, I still like to sing, so when I have some free time, I like to sing karaoke on this cool app called Sing!  It's always great to hear the duets when I offer open calls to join me on a song.  You can check out my profile on Sing! here.

Just recently, I had the greatest epiphany of a great new product that is a one of a kind first that I think a bunch of tech savvy individuals will appreciate.  I'm in the development process of a new business idea that I'm very excited about from an Entrepreneurial perspective.  It is an über awesome techie fashion idea that is very hip and futuristic. Can't wait to share my prototypes with you soon!